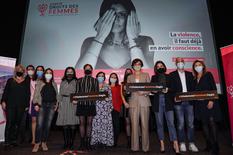 The Women’s Rights Committee presented its new campaign for the International Day for the Elimination of Violence against Women, which falls on 25 November, at the Beaux-Arts cinema.

The aim of this day is to raise public awareness of efforts to combat violence against women and to remind people of the measures in place in the Principality.

Country Women’s Rights Officer Céline Cottalorda said: “Last year, we focused on abuse in the home, because that is where it mostly takes place. This year, we want to give people the keys to help them understand the ways that perpetrators manipulate their victims and to show that abuse can take a variety of forms: psychological, verbal, sexual, economic and physical.”

The campaign will focus on raising awareness of abuse among victims themselves, as well as among families and friends, by highlighting the message: To escape abuse, you first need to recognise you’re experiencing it. “Based on what we hear from victims, it is clear that the first signs of abuse are often easy to miss – or perhaps people don’t want to see them. Then, influence takes hold, and it is very difficult to escape from that,” explains Céline Cottalorda.

The 2021 campaign will involve a number of actions:

Céline Cottalorda emphasised the importance of this widespread mobilisation, which strengthens the impact of the day, and thanked all of the actresses who agreed to take part in the campaign on a voluntary basis, as well as all of the Committee’s partner associations and institutions.