Presentation of Letters of Credence by H.E. Mr. Christophe Steiner to the Episcopal Co-Prince of Andorra 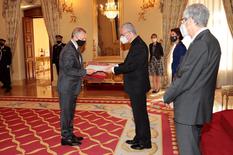 On 7 September 2020, H.E. Mr. Christophe Steiner, Ambassador of Monaco to France, presented his Letters of Credence to H.E. Monsignor Joan-Enric Vives I Sicilia, Archbishop, Bishop of Urgell and Episcopal Co-Prince of Andorra.

The ceremony took place in the Throne Room of the Episcopal Palace, seat of the Co-Prince, in La Seu d'Urgell, in the presence of H.E. Ms. Maria Ubach Font, Minister of Foreign Affairs of the Principality of Andorra and H.E. Mr. Josep M. Mauri Prior, Personal Representative of the Co-Prince.

Afterwards, a private meeting was held between Msgr. Enric Vives I Sicilia and H.E. Mr Christophe Steiner, during which the common values shared by the two principalities were recalled.

Archbishop Joan-Enric Vives I Sicilia conveyed his personal greetings to T.S.H. the Prince and Princess of Monaco and Their children.