Presentation of campaign for 25 November 2020: violence has no place in our lives 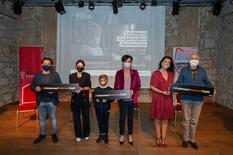 The Women’s Rights Committee presented its new campaign for the International Day for the Elimination of Violence against Women, which falls on 25 November, at the Théâtre des Muses.

The aim of this day is to raise public awareness of efforts to combat violence against women and to remind people of the measures in place in the Principality.

Country Women’s Rights Officer Céline Cottalorda said: “As long as violence persists, we will need to continue to take action against this scourge. Our action is taken across a number of fronts: first prevention, information about the assistance and emergency measures, and also training for professionals who have to deal with violence.”

This year, the campaign is focusing on domestic violence and its consequences for both victims and witnesses, with a key message: violence has no place in our lives. “Too often, the issue of domestic violence is considered only in terms of the immediate victim. Yet it is important not to neglect those who witness it directly, such as children, who can experience severe emotional and psychological disorders after involuntarily seeing this kind of violence in their homes,” explains Céline Cottalorda.

The 2020 campaign is built around several highlights:

This event will only go ahead if developments in the health situation permit.

Céline Cottalorda emphasised the importance of this widespread mobilisation, which strengthens the impact of the day, and thanked the Théâtre des Muses and its director Anthéa Sogno, who attended the presentation along with the actors from the film, including Adrien Franceschi, the young boy who plays the central character.