Presentation of letters of credence of H.E. Mr Lorenzo RAVANO, Monaco’s new representative to the IAEA 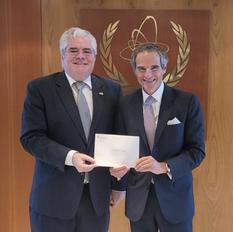 During the conversation that followed, Mr Rafael Mariano GROSSI expressed his gratitude for the Principality’s long-standing support. He also highlighted the personal commitment of H.S.H. the Sovereign Prince to environmental protection, and Monaco’s historic and traditional relationship with the seas and oceans, which are central to the commitment of its Princes, as the Principality marks the centenary of the death of Prince Albert I.

The Ambassador paid tribute to the invaluable work done by the IAEA at this pivotal moment, marked notably by the negotiations over the Iranian nuclear programme and concerns regarding the state of the Zaporizhzhia nuclear plant in Ukraine.

He also reaffirmed the Principality’s support for the Agency’s programmes, including the Programme of Action for Cancer Therapy (PACT), and Monaco’s pride at hosting the marine environment laboratories, with the crucial importance of the seas and oceans now universally acknowledged.

Finally, H.E. Mr Lorenzo RAVANO confirmed that a Monegasque delegation would attend the 66th General Conference of the IAEA, to be held in Vienna from 26 to 30 September 2022.

The IAEA is an Agency within the United Nations system that works for peaceful of nuclear energy by promoting international cooperation and human and economic development through nuclear science and technology. It is also responsible for the international guarantees and checks regime, through inspections of nuclear activities and installations worldwide. Finally, it ensures nuclear safety and security by producing safety standards and assessing nuclear safety risks.