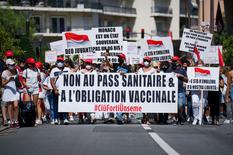 According to a count undertaken by the Police Department, between 750 and 800 people, 15% of whom were children, took part in the protest organised on Saturday by those behind the Facebook group “Manifestation pacifique contre le pass sanitaire à Monaco”  (Peaceful protest against the health pass in Monaco).

The protest was held in accordance with the commitments established by the Police Department. No issues relating to public order, health regulations or, more specifically, compliance with barrier measures and the requirement to wear masks were reported, and the protest had only a limited impact on traffic in the Principality.

The march broke up at around 4.30 pm on Place Sainte-Dévote, as stipulated in the plan put together by law enforcement representatives and the protest organisers.