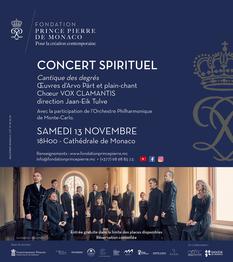 The spiritual concert will take place at the Cathedral at 6 p.m. on Saturday 13 November. The Estonian choir Vox Clamantis, conducted by Jaan-Eik Tulve, will present an a cappella programme, culminating in Arvo Pärt’s Cantique des Degrés for choir and orchestra. The performance of this piece will be particularly resonant as it was commissioned from the composer for Prince Rainier’s jubilee in 1999, and it was premiered that same year, during the Te Deum on Monaco’s National Day.

Vox Clamantis and conductor Jaan-Eik Tulve are so familiar with Arvo Pärt’s vocal work that they have come to be regarded as the specialists. Jaan-Eik and his wife Helena, also a composer, are both Estonian like Arvo Pärt, whom they consider a master. In addition, it was Helena Tulve who took over Arvo Pärt’s role on the Foundation’s Musical Council in 2005.

* Masks must be worn at all events organised by the Prince Pierre Foundation.

The latest news from the Prince Pierre Foundation is available from: www.fondationprincepierre.mc