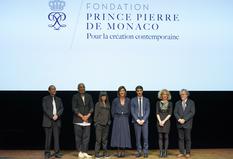 The winners of the 2019 Prince Pierre Foundation awards have now been announced:

Linda Lê for her entire body of work

Jukka Tiensuu, for his work Teoton, a concerto for sheng and orchestra

NMC Recordings, represented by British composer Colin Matthews, for the quality of the actions that it leads in favor of today's music

Arthur Jafa for his work Love Is The Message, The Message Is Death (2016)

This work, which was presented during the award ceremony, will be exhibited on Palazzo Madama in Turin from 1 to 13 November 2019, as part of the Artissima International Contemporary Art Fair.

- Prize for a Critical Essay on Contemporary Art

Anneka Lenssen, nominated by Nada Shabout, for her essay Abstraction of the Many? Finding Plenitude in Arab Painting.

Georges Didi-Huberman for the entirety of his philosophical work.

This prize is awarded jointly by Philosophical Encounters of Monaco and the Prince Pierre Foundation.

Details of all 2019 Prince Pierre Foundation award winners are available from: