The winners of the 2021 prizes were announced at the Prince Pierre Foundation award ceremony this evening. The ceremony was held at Monte-Carlo’s Opera Garnier and presented by Arnaud Merlin, writer, journalist and producer for France Musique. 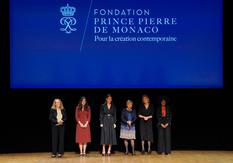 Keen to support and encourage musical creativity, the Prince Pierre of Monaco Foundation has awarded the Musical Composition Prize every three years since 1960. The prize is presented to a composer for a recent work of music.

The winner of the Musical Composition Prize 2021 is Michael Jarrell for his 2019 piece Eindrücke (4), a concerto for violin and orchestra.

The Young Music Fans' Favourite Choice award was introduced in 2011, and rewards a recent work of music each yar. The winner of the award is selected by pupils at Monaco’s Academy of Music and Theatre and those attending the country’s secondary schools, based on a shortlist drawn up by the Musical Council.

The winner of the Young Music Fans’ Favourite Choice 2021 is Beat Furrer for his 2019 orchestral work Nero su Nero.

The Musical Springboard highlights an organisation or individual based on the quality of the work they do to promote contemporary music, and provides support for a new project.

The winner of the Musical Springboard is New Music USA.

Established in 1951, each year the Literary Prize honours a well-known writer in the French language for their entire body of work.

The winner of the Literary Prize 2021 is Annie Ernaux.

Established in 2001 to mark the fiftieth anniversary of the Literary Prize, the Discovery Grant recognises an author in the French language whose first work of fiction has just been published.

The winner of the Discovery Grant 2021 is Abigail Assor for Aussi riche que le roi (As Rich as the King), published by Gallimard.

Established in 2007 in collaboration with the Department of Education, Youth and Sport, the High School Pupils’ Favourite Choice prize is awarded by a jury of secondary school pupils in the Principality, who make their decision from a shortlist of first novels.

The Principality Prize, which was established in 2017, is jointly presented with Philosophical Encounters of Monaco and is awarded to an author for their entire body of philosophical work. The prize honours a life of philosophical writing, an outstanding body of work which has opened up new paths in the field of philosophy and introduced alternative approaches in science, politics, theology, history, anthropology, ethics or psychoanalysis. It has previously been awarded to Jean-Luc Marion, Jean-Claude Milner, Georges Didi-Huberman and Hélène Cixous.

The winner of the Principality Prize 2021 is Julia Kristeva.

The Prince Pierre Foundation also paid tribute to Cristóbal Halffter, a composer and member of the Musical Council, who passed away this year.

The ceremony began with a performance of the first and second movements of Trio “Les Heures”, performed by the Trio Unicordes, a nod to Betsy Jolas, who has been a member of the Musical Council since 1987 and its Chair since 2005.

The latest news from the Prince Pierre Foundation is available from: www.fondationprincepierre.mc