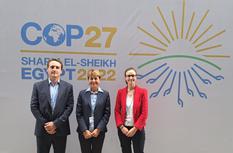 Minister of Foreign Affairs and Cooperation Isabelle Berro-Amadeï visited Sharm el-Sheikh (Egypt) from 14 to 17 November 2022 to take part in the ministerial segment of the 27th Conference of the Parties to the United Nations Framework Convention on Climate Change (COP27).

The Minister represented the Principality at various high-level events, including the first ministerial round table on pre-2030 ambition and the 5th High-Level Ministerial Dialogue on Climate Finance, a biennial event. She was able to highlight the measures that have been taken in Monaco to reduce greenhouse gas emissions, and to reiterate the Prince’s Government’s determination to support developing countries to implement the Paris Agreement.

During the Climate and Clean Air Coalition ministerial meeting, attended by John Kerry, the US Special Presidential Envoy for Climate, Isabelle Berro-Amadeï confirmed that Monaco is focused on the issue of short-lived climate pollutants and their impact on air quality and human health.

The trip also provided an opportunity to arrange several bilateral meetings, including with senior representatives from the Green Climate Fund, to which the Principality is the leading donor per capita.

Finally, the Minister joined many of her counterparts in signing the Ambition on Melting Ice, On Sea-Level Rise and Mountain Water Resources declaration. This initiative, launched by Chile and Iceland, aims to sound the alert about the dramatic consequences of the loss of the cryosphere and the absolute necessity of limiting global warming to 1.5°C.

COP27 drew to a close on Sunday 20 November following two weeks of intense negotiations, with the adoption of the Sharm el-Sheikh Implementation Plan.