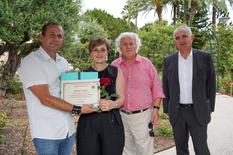 For the second year, the public were invited to choose their favourite rosebush via the Prince’s Government’s social media pages as part of the International Rose Trials organised by the Friends of the Princess Grace Rose Garden Association and the Department of Urban Amenities.

It proved to be a hugely successful initiative, with more than 550 internet users casting their votes between 5 May and 15 June 2022!

With 35 votes on Facebook and a thumbs-up from the Friends of the Princess Grace Rose Garden, it was the Black perfumella ® – MEIzhoro rose, No. 9, that was victorious in the “Hybrid Tea” category, standing out from the rest.

Michèle Richardier, the breeder, and Meilland International, the publisher of the rose, were presented with the Special Public Choice Award at a ceremony held in the Princess Grace Rose Garden and attended by Céline Caron-Dagioni, Minister of Public Works, the Environment and Urban Development, Yves Piaget, President of the Friends of the Princess Grace Rose Garden Association, and Jean-Luc Puyo, Director of Urban Amenities. 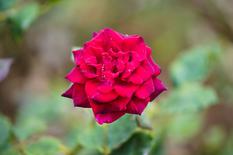 This festive evening occasion was also an opportunity to present prizes to the winning breeders announced on 4 May, following the deliberations of the international jury.
The company NIRP International was awarded the Perfume Cup, presented by Monaco City Hall, for the rose EUDORA, and Marie-Françoise Dorieux was awarded the Piaget Trophy, a stunning white gold and diamond brooch from the PIAGET ROSE collection, donated by the jewellery company of the same name, for her rose CATHERINE FROT.

Mr Piaget highlighted the commitment of these producers, reiterating that these were families who had passed the passion down from generation to generation, combining expertise, rigour, inventiveness and artistry.
These three categories reward the different aspects of rose breeding: the Jury’s 1st Prize honours technical perfection with criteria established according to a precise scale; the Public Choice Award often highlights varieties that will be popular with individuals; and finally the enthusiasm for perfume, which is just as strong when it comes to gardens and flower bouquets as it is in cosmetics – as Yves Piaget says, “a rose without perfume is a silent rose.”

To celebrate the festival of music and bring the 6th International Rose Trials to a close, the choir from Collège Charles III gave a performance of some sunny tunes which delighted the audience.

The evening concluded with a convivial cocktail reception in the Princess Grace Rose Garden.