Return of the traditional consular meeting 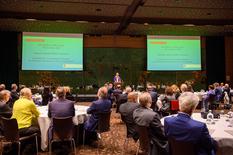 As part of the celebrations of Monaco’s national holiday, the traditional consular meeting provided an opportunity to bring together Monaco’s honorary consuls around the Monegasque diplomatic corps and offer them an overview of current issues in the Principality.

After a two-year hiatus, Isabelle Berro-Amadeï was delighted to open the 2022 consular meeting, and to welcome Monaco’s consuls overseas for the first time in her capacity as Minister of Foreign Affairs and Cooperation.

H.E. Pierre Dartout expressed gratitude to the consuls on behalf of the Prince’s Government for their work to promote the Principality, emphasising that “the consular corps is a vital body which makes a huge contribution to Monaco’s attractiveness.”

During the 2022 meeting, Minister of Finance and Economy Jean Castellini talked about the importance of maintaining balanced public finances and the diversified nature of Monaco’s economy. He also noted the OECD’s recent recognition of the results achieved by the Principality on international cooperation on tax matters.

The consuls also heard presentations by Frédéric Genta, Country Chief Officer for Attractiveness and the Digital Transition, and Guillaume Rose, CEO of the Monaco Economic Board. This meeting between the consuls and representatives from Monaco’s institutions was followed by lively discussion.

The Principality currently has 130 active consulates in 82 countries around the world.