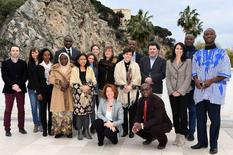 From 21 to 23 February, the Department of International Cooperation brought together in Monaco the six referring doctors of the West Africa and Madagascar Sickle Cell Network (Réseau Drépanocytose Afrique de l’Ouest-Madagascar) to finalise a joint guide on treating the disease.

Over the course of the three days, the doctors completed work on the medical guide, which will enable health care workers with little or no training in treating sickle cell disease to test and treat patients, whether they are in a rural health centre or a major hospital.

Dissemination of the guide in the six countries involved is planned for 19 June 2018, which is World Sickle Cell Day.

Sickle cell disease, a hereditary haemoglobin disorder, is the world’s most common genetic condition, with around 50 million carriers. Despite the strong prevalence and very high mortality rate among children under five who are not treated, the disease is little known and efforts to increase research and access to treatment remain inadequate.

There will be further reporting on Tuesday 27 February on the Monaco Info Facebook page and at 7 pm in the Focus Info segment of the channel’s news programme.