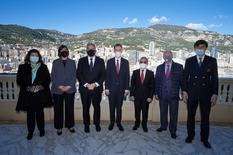 H.E. Ms Isabelle Berro-Amadeï, Ambassador and Permanent Representative to the Organisation for the Prohibition of Chemical Weapons (OPCW), took part in the work of the 26th Session of the Conference of the States Parties to the Chemical Weapons Convention, held in The Hague (Netherlands) from 29 November to 2 December 2021. Ms Berro-Amadeï was accompanied by Counsellor Johannes de Millo Terrazzani.

Among the issues addressed, the Conference adopted a decision intended to provide improved oversight of the aerosolised use of certain central nervous system-acting chemicals for law enforcement purposes. The Conference also approved the OPCW’s budget for 2022 and 2023.

Monaco renewed the financial assistance it has been providing since 2016 to support the OPCW’s work in Syria, with a new voluntary contribution of €10,000 for the Trust Fund for Syria Missions.

The Conference of the States Parties is the governing body of the OPCW, whose aim is to work to eliminate chemical weapon stockpiles and the threat of their use, and to encourage the use of chemistry for peaceful purposes.

The Principality of Monaco has been a member of the OPCW since 29 April 1997, the date on which the Chemical Weapons Convention entered into force, and is thus a founding member of the organisation.