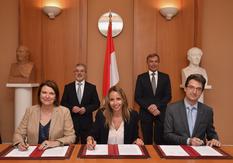 In the background, from left to right: Patrice Cellario, Minister of the Interior, and Didier Gamerdinger, Minister of Health and Social Affairs. © Government Communication Department / Michael Alesi

In the presence of Didier Gamerdinger, Minister of Health and Social Affairs, and Patrice Cellario, Minister of the Interior, a partnership agreement between Princess Grace Hospital (CHPG) and the Department of Education, Youth and Sport was recently signed by Isabelle Bonnal, Director of Education, Youth and Sport, and Benoîte de Sevelinges, Director of CHPG, to promote school education in the hospital setting.

Following work to assess the prospects for organising educational activity in the hospital setting, in order to meet the needs of children who have been hospitalised, this agreement sets out the aims and practicalities involved. An education professional from the Department of Education, Youth and Sport is undertaking a period of observation at CHPG, which began at the beginning of this term and will run until the end of the school year. This will provide an opportunity to evaluate needs and the continuity of education for school pupils who are hospitalised in the paediatric and psychiatric departments.

A second partnership agreement was also signed between CHPG and the Monte-Carlo Philharmonic Orchestra by Benoîte de Sevelinges and Sylvain Charnay, Director of the Orchestra, on pursuing joint artistic and cultural projects and continuing to offer concerts performed by musicians from the Orchestra for the benefit of residents at Cap Fleuri and A Qietüdine, as well as the elderly people who receive care at the Rainier III Gerontology Centre and their families. More than 40 concerts have been given since CHPG and the Orchestra first joined forces in 2011. Today’s signing of this agreement will enable a continued partnership with the geriatric care department and the development of projects with other hospital departments.