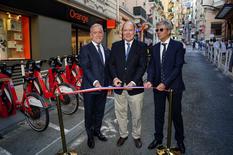 On Monday 12 September, H.S.H. Prince Albert II of Monaco formally opened the first Monabike electric bicycle station to be installed in France, along with six escalators co-funded by the Principality. The Prince was accompanied by Ms Céline Caron-Dagioni, Minister of Public Works, the Environment and Urban Development and her predecessor, Ms Marie-Pierre Gramaglia, now a member of the Crown Council, Mr Stéphane Valeri, President of the National Council, Mr Bernard Gonzalez, Prefect of Alpes-Maritimes, Mr Gérard Spinelli, Mayor of Beausoleil, and numerous representatives of Monegasque and French government departments.

These new means of locomotion are being installed as part of the global soft mobility policy adopted by the Prince’s Government.

By the end of 2022, the existing services offered in the Principality by the Monabike network and the bus operator Compagnie des Autobus de Monaco (CAM) will be completed with the addition of three new stations located in the neighbouring municipality of Beausoleil:
- The “Marché” station, with 12 docks, located opposite Monte-Carlo market;
- The “République” station, with 12 docks, located on Boulevard de la République;
- The “Victor Hugo” station, located in the car park of the same name, with 15 docks. 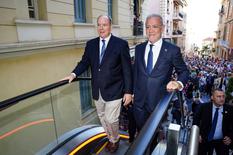 In terms of soft mobility, walking is also being encouraged with the Principality providing an investment of 5 million euros to jointly fund the installation of ten escalators in Beausoleil (two in 2018, two in January 2022, and a further six in September 2022).
The 458 steps between the market and the Riviera Palace are no longer an obstacle to be overcome but rather a pleasant, free and convenient means of travelling between two urban centres, as witnessed by the 5,500 journeys made on the Riviera line (which runs from Avenue du Général de Gaulle to Avenue Carnier) and the recent Alcazar line, which is already used by 1,500 passengers every day.

These soft mobility solutions are designed to improve quality of life and reduce the number of private vehicles on the roads, with the aim of cutting greenhouse gas emissions, and further strengthening the bonds of friendship between France and Monaco.