Sovereign cloud launches in the Principality of Monaco, a first in Europe that will improve Monaco’s competitiveness 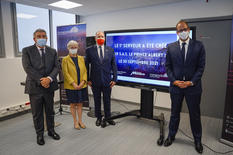 As part of the Extended Monaco programme, the Prince’s Government is today launching Monaco Cloud, a key tool in spreading economic influence in Monaco and beyond the country’s borders. With 5G coverage, the provision of 10GB fibre to individuals and the roll-out of digital identity, the Principality of Monaco has the digital infrastructure it needs to grow its economy and exert influence on the global stage via its pioneering model.

H.S.H. Prince Albert II – surrounded by H.E. Pierre Dartout, the Minister of State, Stéphane Valéri, President of the National Council, Frédéric Genta, Country Chief Digital Officer, Sophie Thevenoux, President of Monaco Cloud, Pierre Puchois, CEO of Monaco Cloud, and numerous other dignitaries – welcomed the fact that Monaco was staking its claim as a nation of excellence in the digital field:

“I am particularly proud that the Principality of Monaco is the first country in Europe to have its own sovereign cloud. This achievement forms part of our ambitious policy for the digital development of our economy, and is a key aspect of its appeal to our population and to all those who wish to make their home here.”

Thanks to this new infrastructure, which is unique at the national level in Europe, Monegasque companies, as well as foreign investors keen to establish themselves in the Principality of Monaco, will have access to a genuine value proposition:

All of the Monaco Cloud infrastructure will be operated in the Principality under Monegasque legislation, guaranteeing high availability of services even in the event of an incident.

“The Sovereign Cloud is the infrastructure the Principality needed to guarantee our sovereignty, our security and our attractiveness in a digital world. The Cloud will be critical to the Government’s efforts to transform and modernise,” emphasised Pierre Dartout, Minister of State for the Principality of Monaco.

Beyond an economic strategy, the Principality is positioning itself at the forefront of digital development to guarantee the security of the defence system provided by the Cloud, in line with Monaco’s attractiveness, and to continue to set new standards of digital excellence. Thanks to the Cloud, Monaco can now free itself from its geographical constraints for good, and spread its economic influence beyond its borders.

“Monaco Cloud is a highly strategic initiative which is being pursued in addition to the construction we began two years ago; a key element that will enable our digital economy to make the transition to the world of the future, so that Monaco can continue to enhance its attractiveness and the strength of its model,” explained Frédéric Genta, Country Chief Digital Officer.

The Sovereign Cloud offers businesses based in Monaco and abroad access to a wide range of innovative services that are essential to their growth, such as virtual machines, storage and backup. In addition, Monaco Cloud will offer a selection of software (a digital safe, an electronic archiving system, an ERP solution, etc.).

Extended Monaco is the Monegasque model in a digital world. Led by the Digital Transition Office, the programme’s goal is to make digital technology the foundation of all public policies to provide a sustainable basis for all aspects of society, in terms of health, education and public services. Since 2019, Extended Monaco has been implementing initiatives to improve quality of life for Monegasques, diversify the economy through digital technology, and create a competitive and resilient digital ecosystem.