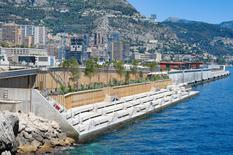 Following the success of the sun deck and facilities on the Stefano Casiraghi Esplanade on the Rainier III sea wall during previous summer seasons, the Prince's Government decided to completely redesign and optimise the space, creating a great place to spend time and enjoy a wide range of activities.

Major construction work was carried out as part of an ambitious project to develop the Rainier III sea wall over the course of seven months between November 2021 and 1 June 2022.

The development of the sun deck was led by the Department of Urban Amenities, which put all its expertise to work in order to create a link between the greenery on the Rocher overlooking the space and the marine environment which borders it, making up one of the Principality’s most important gateways to the sea.

Several factors were very carefully considered during the design process – the impact of the swell, structural aspects, safety and the environment – in order to deliver a project that meets the highest environmental and urban development standards.

An educational component was also designed in collaboration with the Marine Educative Area, since raising awareness among the younger generations is a key focus of the policy instigated by H.S.H. the Sovereign Prince and carried out by His Government.

Several organisations working to protect the marine environment in the Principality, including the Prince Albert II Foundation, the Monegasque Association for the Protection of Nature, the Department of the Environment, and the permanent secretariats of the RAMOGE Agreement, ACCOBAMS and the Pelagos Sanctuary have had the opportunity to support the project by displaying information on panels opposite the sea to promote understanding of their work.

Finally, the project also included a restaurant, so that residents and summer visitors to the Principality can have something to eat while enjoying a breathtaking view of the Mediterranean.