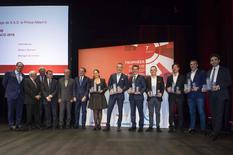 The Eco Club of Monaco's 7th Trophy Awards Ceremony was held on Monday at the Grimaldi Forum. The event was organised by the Monaco Economic Board (MEB), in partnership with the Nice-Matin Group.

The ceremony took place in the presence of Jacques Boisson, Secretary of State, representing H.S.H. Prince Albert II, Jean Castellini, Minister of Finance and Economy, and decision-makers and economic players from the sector.

A total of seven trophies were awarded to recognise businesspeople from the Principality who help to promote Monegasque excellence in their area of activity:

- Manager of the Year:  Gaëlle Tallarida, Director General of the Monaco Yacht Show.

- Made in Monaco:  Doro, Pierre Batsalle.