The Military Force Makes a Commitment to Monaco's Energy Transition 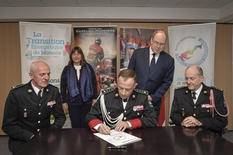 The Military Force, represented by Colonel Tony Varo, Supreme Commander, joined the National Pact for Energy Transition on Wednesday 22 January, in the presence of H.S.H. the Sovereign Prince, Ms. Marie-Pierre Gramaglia and Mr. Patrice Cellario, respectively Minister of Public Works, the Environment and Urban Planning, and Minister of Interior, and Ms. Annabelle Jaeger-Seydoux, Director of the Mission for Energy Transition (MTE).

The Military Force is the 100th entity to sign the National Pact for Energy Transition.  Colonel Tony Varo signed the pact on behalf of the two Corps under his authority, accompanied by Lieutenant-Colonel Norbert Fassiaux, Chief of the Fire and Emergency Service and Major Gilles Convertini, Head of the Palace Guards.

Echoing this commitment, Anthony de Sevelinges, Head of the Public Buildings Maintenance Office (SMBP), then gave a presentation on the installation of the photovoltaic panels that have recently been placed on the roof of the Fontvieille Fire Station.  To illustrate his remarks, a screen was used to show the production of energy from the panels in real time.  This energy is fed back directly into the building's electrical installations.

In her speech, Marie-Pierre Gramaglia, recalling that "these issues reflect the importance of the climate emergency," welcomed the willingness of the Military Force to make a commitment to energy transition, stating that "The involvement of the Palace Guards and the Fire and Emergency Service sends a strong signal;  all the more so as I know your motivation is strong and longstanding."

Among the actions already implemented, we would mention the following in particular:

By joining the National Pact, the Military Force also undertakes to reduce the number of plastic bottles used;  these will soon be replaced in offices by water fountains and drinking bottles.   It will also implement a training course in eco-driving techniques for drivers of vehicles with internal combustion engines.  Each Corps has also appointed an "energy representative," who will be responsible for monitoring consumption via the WIT system.  Finally, several MTE awareness-raising workshops are planned for February and will continue throughout the year.

You can follow this topic this evening on Monaco Info and on the Government's social media networks.

The MTE in a few key figures:

For full information on the Principality's energy transition, see: www.facebook.com/MTEMonaco and transition-energetique.gouv.mc 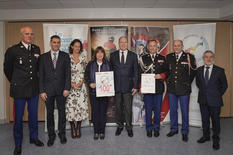