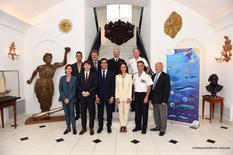 On 11 October 2019, the Maritime Prefect of the Mediterranean, Vice-Admiral Laurent Isnard, invited the Parties to the Pelagos Agreement to celebrate the twentieth anniversary of the signing of the Agreement, at his residence at Fort de Cap Brun in Toulon.

The ceremony was opened by the Maritime Prefect and punctuated by speeches by the Authorities of the Pelagos Agreement.  This event, which was held following a meeting of the French Party's National Sanctuary Committee, was an opportunity to review activities and the objectives achieved, particularly with regard to scientific research and action taken in association with local administrations in the Sanctuary area.  It was also an opportunity to open up future prospects for strengthening this Agreement.

The ceremony took place in the presence of representatives from the various entities that work in the Sanctuary.

At this event, Costanza Favilli, who was recently appointed Executive Secretary of the Agreement, gave an update on the Work Programme and future activities at the tripartite level.