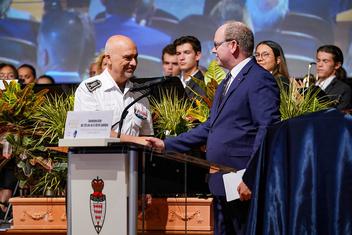 The ceremony to commemorate the 120th anniversary of the creation of the Police Department was held at the Oceanographic Museum, in the presence of H.S.H. the Sovereign Prince, Charlotte Casiraghi, Patron of the Police Department, H.E. Mr Pierre Dartout, Minister of State, Patrice Cellario, Minister of Interior, Mr Richard Marangoni, Police Commissioner, senior officers, active and retired personnel, and numerous personalities.

The event saw students from the Rainier III Academy sing the National Anthem and the Anthem of the Police Department, while H.S.H. the Sovereign Prince and the Police Commissioner gave speeches, and the various commemorative items* created to mark the occasion were presented to H.S.H. the Sovereign Prince and to Charlotte Casiraghi. Special awards for bravery and service were also presented to the Police Officers Guillaume Oversteyns and Charly Dubrulle.

Founded by Prince Albert I in 1902, Monaco’s Police Department’s official motto is “Fides - Diligentia – Virtus”, and its patron saint is Saint George.