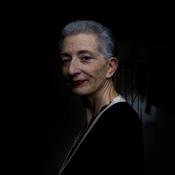 Hélène Cixous is a French woman of letters, writer and poet, playwright and Anglicist, who is known for her commitment to various aspects of feminism.  She has held seminars at the Collège international de philosophie (International College of Philosophy) since 1983 and was involved in the founding of the University of Paris VIII, the French National Book Centre, the International Parliament of Writers and the Anti-Apartheid Committee.  Jacques Derrida considered her the greatest living writer in the French language;  they organised colloquia together and held seminars at the International College of Philosophy.  Hélène Cixous has published essays on several well-known figures such as Franz Kafka and Samuel Beckett.  Her essay Le rire de la Méduse (The Laugh of the Medusa) is regarded as a seminal work of modern feminism.  She is the author of sixty or so books and is a patron of the European Society of Authors and Translators.  She was awarded the Cross of the Legion of Honour in 1994 and the Marguerite Yourcenar Prize in 2016.

As a reminder, the Prince Pierre Foundation and the Founding Members of the Monaco Philosophical Meetings jointly undertake to award the Principality's Prize each year to an author for his or her entire philosophical work.

This therefore recognises a lifetime of philosophical writing, outstanding work that has opened up new paths in the field of philosophy and taken different approaches to science, politics, theology, history, anthropology, ethics or psychoanalysis.

The winner of the Principality's Prize is invited to give a lecture in the year following the awarding of the Prize.  This will take place in May 2021 at the Maison des Océans in Paris.

For all the latest news from the Prince Pierre of Monaco Foundation, see: www.fondationprincepierre.mc

For all the latest news from the Monaco Philosophical Meetings, see:  www.philomonaco.com