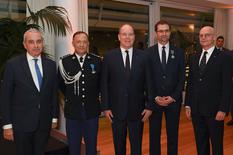 Thomas Fouilleron, Director of the Archives and Library at the Prince’s Palace, and Colonel Tony Varo, Supreme Commander of the Military Force, were honoured by high-level French authorities at a ceremony on Friday 10 January 2020 attended by H.S.H. the Sovereign Prince, Minister of State Serge Telle, and many other personalities.

Laurent Stefanini, France’s Ambassador to the Principality, explained that the honours “recognised two distinguished French nationals in Monaco, whose commitment to serving the Principality and contribution to strengthening the good relationship between Monaco and France are exemplary.”

Thomas Fouilleron, who was made a Knight of the Order of Arts and Letters, concluded his speech with a promise: “Be assured, Your Highness, Ambassador, that I will strive to keep working on behalf of the Monegasque nation, and its intellectual, artistic and literary forces, with the same enthusiasm and the same determination.”