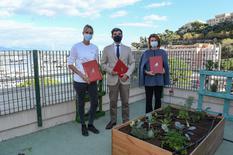 In place since last March, the agreement had not previously been made official due to the health crisis. It envisages the organisation of a number of educational activities relating to the environment and the development of organic kitchen gardens at various locations in the Principality, including the Prince Albert II Leisure Centre, Parc primary school, Fontvieille primary school, Monaco’s Vocational and Catering School and Condamine primary school, where the signing ceremony took place.

The aim of the agreement is to allow pupils, from a very young age, to interact with nature, learn about the process of producing fruit and vegetables, and find out how to eat a healthy, balanced diet through knowledge of the products they consume. Nearly 3,000 pupils per year take part in gardening and harvesting their produce.

During the ceremony, the Prince Albert II Foundation presented pupils in class CM1 B (Year 5) at Condamine primary school with a card game featuring the major Sustainable Development Goals established by the United Nations in 2015. This fun educational tool will be distributed to all primary school pupils over the next few days.

The tripartite agreement confirms that the Prince Albert II Foundation and Terre de Monaco are now the Department of Education, Youth and Sport’s preferred partners in the development of genuine sustainable development education for the Principality’s pupils.