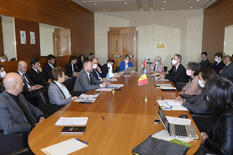 Delegations* from Monaco and Andorra, led respectively by H.E. Mr Gilles Tonelli, Ambassador and Special Advisor for Negotiations with the European Union, and Mr Landry Riba, Secretary of State for European Affairs and Chief Negotiator, were welcomed to San Marino by Mr Luca Beccari, Minister of Foreign Affairs, on Thursday 14 October 2021 to discuss progress on negotiations with the European Union (EU) with a view to concluding an association agreement.

This tripartite working meeting, the first to be held in person since the health crisis, was an opportunity for the three countries to provide an update on the status of their bilateral discussions with the European Commission. The three chief negotiators agreed that substantial progress had been made on the internal analysis of European regulations, and identified the priority areas for each country.

Andorra, Monaco and San Marino agreed to ask the European Commission to restart in-person meetings as soon as possible and to negotiate the key issues for each country as a priority.

The three delegations also decided to improve the existing strategic coordination to raise awareness within the European Parliament and EU member states regarding the association agreement and the specific nature of the small states that are enclaves within European territory. 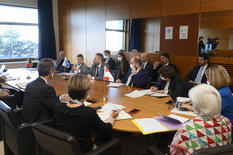