Wave Energy Converter : Principality innovates by harnessing the power of the waves 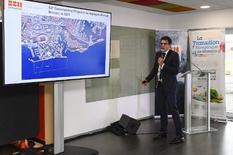 The Prince’s Government and SBM Offshore yesterday presented to the press a key step in the Wave Energy Converter (WEC) S3® project, which involves harnessing wave energy to generate electricity.

An initial prototype will be deployed in Monegasque waters in 2021.

This system represents a world first. It constitutes a major technological breakthrough in the field and shows just how important it is to marry renewable energy and innovation.

Having already been tested in the laboratory, the system will also need to be tested at sea before it is commercialised, and a prototype will be deployed in Monegasque waters (offshore from Fontvieille Heliport) in 2021 for an estimated trial period of one year.

The Prince’s Government is offering its support and full expertise to the SBM Offshore technical teams during this stage. Around ten teams from the Ministry of Public Works, the Environment and Urban Development have been mobilised to offer full assistance to SBM Offshore, helping to make this trial a possibility in the Principality. The Mission for Energy Transition connected the Group with the relevant government teams to study the feasibility of an offshore test.

Speaking at the presentation of the wave energy converter, Marie-Pierre Gramaglia said: “The reason that we are working with SBM Offshore on this ground-breaking project is because the Principality, at the behest of its Princes, has long been a land of innovation.  It is in this spirit that government teams have been mobilised to support their counterparts at SBM Offshore with this trial, helping to make it a possibility in the Principality.”

The prototype is a ‘rubber tube’, which is 60 metres long and 1.2 metres in diameter. It will be submerged at a depth of approximately four metres. The offshore footprint of the trial site will be around 300 m x 80 m, including anchors.

To begin with, measurement buoys will be installed in the area concerned to assess and measure the swell. SBM Offshore will remain in close communication with the Government at every stage of the project.

The installation of this system will help to position Monaco as a facilitator of innovative renewable energy projects, especially given that the technology is being developed by a local company. The project will also, eventually, provide an interesting addition to the renewable energy laboratory in Fontvieille.

Note: WEC S3® is a project that was developed and launched by SBM Offshore several years ago with support from the French Government’s Investissements d’Avenir programme operated by the Agency for the Environment and Energy Management (ADEME). SBM Offshore has been diversifying into renewable energy for more than 10 years. 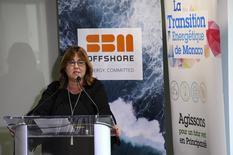