Workshop on human impacts on Mediterranean marine ecosystems and the economy

On 18 and 19 October, a workshop was held at the Oceanographic Museum on the impact of anthropogenic changes on Mediterranean marine ecosystems and the economy. Co-organised by the Monaco Scientific Centre and Plan Bleu, with support from the Prince’s Government, the Prince Albert II Foundation and the United Nations Environment Programme (UNEP) Mediterranean Action Plan (MAP) adopted by the Barcelona Convention, the workshop brought together some 40 Mediterranean experts. The event is part of the Monaco Scientific Centre’s efforts to establish close links between socio-economic and environmental approaches, and also follows on from a series of four workshops held to support the preparation of the first assessment report by the Mediterranean Experts on Climate and Environmental Change (MedECC). 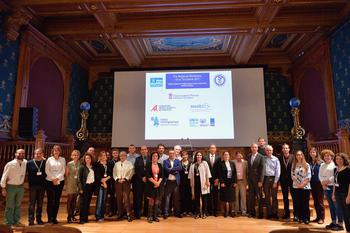 Photo caption: Gilles Tonelli, Minister of Foreign Affairs and Cooperation, surrounded by all of the workshop participants

MedECC is a network of environmental change experts whose aim is to supply policymakers in the Mediterranean with scientific information and recommendations relating to environmental problems, which are of particular significance for the region. MedECC is also a flagship initiative of Chapter 4 of the Mediterranean Strategy for Sustainable Development (MSSD) 2016–2021, part of UNEP’s MAP. MedECC also contributes to the general climate change adaptation strategy currently being implemented at the regional level.

This interactive workshop brought together 45 experts from 17 countries and various fields of expertise, from the social sciences to the natural sciences. Its goal was to provide experts with a platform for discussion in order to identify anthropogenic threats and their impact, over the short and longer term, on the services provided by marine ecosystems in the Mediterranean. The workshop also offered an opportunity to identify the policy and scientific responses that might be put in place to reduce the impact of these threats and their causes. Given the existing regional frameworks (the MSSD, the Regional Climate Change Adaptation Framework, etc.) and the chosen theme, the discussions helped to establish recommendations, governance actions and practices to be implemented at the local and regional levels in order to mitigate these impacts. To compare the threats and impacts and put forward more pragmatic solutions, groups covering three areas of the Mediterranean – North, East and South – were set up.

After two days of productive discussion, the workshop’s findings were announced on Thursday 19 October, in the presence of Gilles Tonelli, Minister of Foreign Affairs and Cooperation. In his speech, Mr Tonelli recalled the importance of scientific research for expanding knowledge and supporting the introduction of specific measures to protect and conserve the marine environment in the Mediterranean. He concluded by reiterating the Principality of Monaco’s constant commitment, including through the Monaco Explorations initiative.