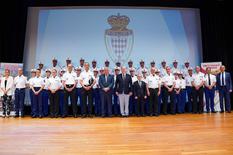 The new trainee police lieutenants and cadets (Yann Beunard Class of 2021/2022, named after an officer who tragically passed away in 2021) were awarded their epaulettes by H.S.H. the Sovereign Prince and their professional identity cards by Minister of the Interior Patrice Cellario at the Rainier III Auditorium on Thursday 7 July 2022. The ceremony was attended by Minister of State Pierre Dartout, Police Commissioner Richard Marangoni and his staff, and a number of other high-profile figures.

A total of three police lieutenants and 21 cadets joined the Police Department as trainees. There were five women among this class of officers and cadets, including both of the trainees who came top in their classes.

Following ten months of theoretical training, including lessons on the Highway Code, professional intervention techniques, defence and interrogation techniques, shooting, legal regulations, languages, information technology, typing, sport, etc., and during which they also had an opportunity to learn first aid and water rescue techniques, the students are undertaking a 14-month professional training period.