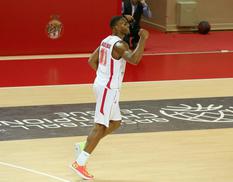 For their third match in the Basketball Champions League, A.S. Monaco Basket meet the Danish team Bakken Bears (from Aarhus) this evening at 6.30 p.m.

On the second day of the Champions League, the Danish team lost 82 to 66 to the Greek team Aris Salonika and are now ranked last in Group A.  Faced with the Monegasques, co-leaders of the group, the Bears will try to shine, spurred on by their spectators.

Paradoxically, the Bakken Bears are the best team for rebounds in the competition.  The Danes achieve an average of 41.5 rebounds per match.  The Monegasques will therefore have to stay strong under the net.

With regard to the Roca Team, Jamal Shuler will attempt to increase his score in the European competition.  Although the American player is the best scorer in Pro A, with an average of 14.7 points per match, he is struggling in the Champions League, with an average of just 3 points in the two last matches.

After their narrow victory over the Slovenian team Helios Suns, 59 to 55, Mitrovic's players are keen to win in Denmark.  If they are victorious, the Monegasques will potentially be able to take the lead in their group.