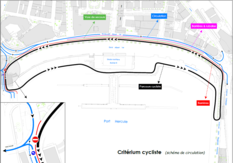 The traditional cycling Criterium, organised under the aegis of the Monegasque Cycling Federation with the participation of the French Cycling Federation, will be held on Sunday 20 March 2022 in the Principality.

No less than seven events, with the same route as in previous years, will take place on the lower part of the Grand Prix circuit, in the Port Hercule area.

The setting up of the circuit will give rise to parking bans all along the course as from 18 March.

Traffic management and diversions, directly related to the races, will be effective on the day of the event, 20 March, from 6.30 a.m. to 6.30 p.m:

- Boulevard Albert 1er
The lane usually reserved for buses will be used for the races.
The service lane will be used for light vehicles, city and inter-city buses and tourist transport (Monaco Tour and Monaco le Grand Tour).

The races will also have an impact on the itineraries of the CAM's Line 1 bus (Monaco Ville - Saint Roman) and the Monaco Tour, which will be diverted from the Boulevard Albert 1er to the Avenue d'Ostende.