Managers, staff and players from AS Monaco Basket (the Roca Team) met the media during a pre-season press conference at the Gaston-Médecin Hall in the Louis II Stadium on Tuesday.

Surrounded by Paul Masseron, Vice President of AS Monaco Basket, Oleksiy Yefimov, the club’s Executive Director, Saša Obradović, the Roca Team coach, Dee Bost, the team captain, and Kim Tillie, a new recruit, Minister of the Interior Patrice Cellario said: “I believe that with the team that has been put together for the new season, there is every chance of achieving the same success that we saw last year, if not more. I am therefore particularly happy to be here with the team today for the launch of the new season and to demonstrate the Government’s support for sport in general, and for the Roca Team in particular.”

Full information on the Roca Team and new developments this season can be found in the attached press kit. Further reporting will follow on Monaco Info. 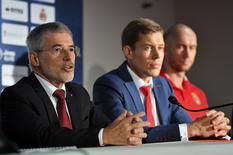