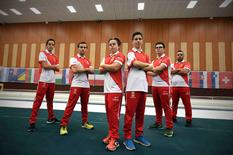 The "Denis Ravera" Sport Boules World Championship (Under 18-Under 23), held under the High Patronage of H.S.H. Prince Albert II, is taking place from 28 November to 3 December in Monaco.

24 countries from 5 continents will compete in 6 events:

The aim of hosting this championship is to honour the memory of Denis Ravera, former President of the Rocher Boules Club, promote sport boules in the Principality and demonstrate Monaco's commitment to this sport, which is closely linked to its history, to the international boules community.