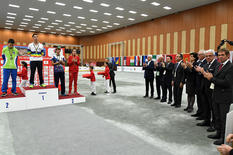 Gianni Bresciano wins a bronze medal in the combination event.

For the Monegasques, Gianni Bresciano obtained a bronze medal in the combination event.

In the doubles, also for the Monegasques, Gianni Bresciano and Allan Velli played a tour de force, rising to the quarter finals.

Finally, in the singles, Quentin Grillet ranks among the best eight players, along with Alexandre Trichard in the progressive and Jordan Rugarri in the precision shooting.

Monaco therefore rises to 6th place among the nations (out of the 24 present), which in itself represents a remarkable performance.