It’s official. The Meeting Herculis EBS will be hosted on Friday 9 July 2021 at the Louis II Stadium, with the same promise as always: offering athletics at its best. 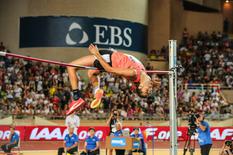 Scheduled in two weeks prior to the Olympic Games in Tokyo (23 July – 8 August), the 2021 edition of the prestigious  Monacan athletics meeting will comprise 14 events. What is more, the competition will pick up speed and gain height this year thanks to the presence of Yulimar ROJAS (quadruple world triple jump champion), Gianmarco TAMBERI (reigning Italian champion of the high jump) and Djilali BEDRANI (5th in the last world championships in Doha in the 3,000m steeplechase). A number of other champions will be joining them over the coming weeks to participate in the Monacan leg of the Wanda Diamond League, which will be broadcast on CANAL+ (through until the 2024 edition).
In 2020, the Louis II Stadium took centre stage in a World record set by the Ugandan Joshua Cheptegei in the 5,000m.

The "Final 3": A novel new feature this year for the so-called horizontal competitions, namely the javelin, the triple jump and the long jump

Created to give all the spectators and viewers the opportunity to follow the decisive attempts in the field competition.

After the first 5 attempts in line with the existing rules for the 8 participating athletes, the best 3 athletes will compete in the "final 3", each receiving one decisive attempt (the jump-off being done in reverse order of qualification, namely 3-2-1). The result of this 6th jump will determine the final ranking for the competition.

NB: in the event of a tie in the "final 3" (same result or two faults), the ranking will be based on the best result of the whole competition.

The meeting will offer up 14 events:

Price between €10 and €50 – Information and bookings at www.herculis.com

In close collaboration with the authorities in Monaco, the Wanda Diamond League and World Athletics, the organisation is working to ensure the highest level of health and safety for both the public and the athletes whilst putting on a top-level competition.

Public hospitality conditions at the Meeting Herculis EBS 2021:
Respect of the health guidelines and mask wearing compulsory
Social distancing measures in the stands: All seats will be numbered and spectators will have to adhere to the placing indicated on their ticket. Solely one row in 2 will be available for sale and each order will be separated by an empty seat.
Capacity: Limited to 8,000 spectators
Terms of access in the Principality and the Louis II Stadium: normal access subject to government guidelines currently in force.