Monaco ON at centre of Monte-Carlo E-Rally 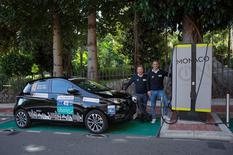 The rally got underway on 20 October with a silent start in Châteauneuf, the first municipal park in France to be self-sufficient in green energy. The competitors arrived in the Principality on the evening of Friday 22 October with a challenge: finding a place to charge at one of the numerous Monaco ON electric charging stations that have been installed on the streets and in public car parks. To help them, they made use of the Your Monaco map showing available charging points in real time: https://yourmonaco.mc/carte

The Monaco ON network has been rolled out in the Principality over the last 18 months and reflects an ambitious strategy for supporting electric transport. In addition to being free, the charging points are now more powerful and can be easily identified by their yellow colour. No subscription is required to use them. The Government’s stated aim is to replace the self-service outlets with electric charging stations featuring several charging points to make charging electric vehicles ever more efficient and accessible to as many people as possible. 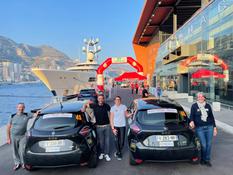 The Department of Urban Amenities took part in the rally for the second year in a row. The department was represented by two teams, one female – Karel Colibert (Design Office) and her co-driver Nathalie Zbinden (Gardens Section) – and the other male – Olivier Peirone (Roads & Traffic Control Section) and his co-driver Damien Viola (Energy Section).

Behind the wheels of latest-generation Renault ZOEs, the crews were flying the flag for the Government as part of the Daghe Munegu team, alongside their colleagues from the Military Force and Monaco City Hall.