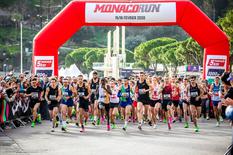 After 2021, when only professional athletes were able to compete, Monaco Run, organised by the Monegasque Athletics Federation, will once again welcome all running enthusiasts for the 2022 race.

The programme will feature Running Expo – which will be in place throughout the weekend on Quai Albert I, where all races will start and finish – and three events to be held on Sunday 13 February:

A 10 km circuit through the streets of the Principality, taking in its lanes, parks and monuments.

A 5 km charity walk created to raise money and public awareness for the fight against cancer.

A 5 km route, considered to be one of the fastest in the world, following the major avenues of the Principality from Port Hercule to Quai Albert I, via Boulevard Princesse Grace and the Monte-Carlo Bay Roundabout.

The event will have an impact on vehicle parking in the Port Hercule area on 12 and 13 February.

During the races on Sunday 13 February, there will be disruption at the entrances and exits to car parks on the routes (temporary access cards for other car parks will be offered to season ticket holders) and traffic restrictions, including full closure between 10 am and 11.15 am of the following roads: Serravalle Tunnel, Route de la Piscine, Avenue J.F Kennedy, Boulevard Louis II, Portier Roundabout, Avenue Princesse Grace, Monte-Carlo Bay Roundabout.

Some city and intercity bus services will be subject to diversion as follows:

There will be no service to the bus stops on Avenue Princesse Grace, or to the Kennedy, Rainier III Auditorium, Portier, Spélugues, Citronniers and Place du Casino stops until 12 pm

- No. 1: diversion from Boulevard Albert I toward Avenue d’Ostende, from the first bus of the day until 12 pm

- No. 5: diversion from Boulevard des Moulins, with the service terminating at Place des Moulins, from the first bus of the day until 11 am

Due to the closure of Avenue Princesse Grace, service no. 110 will follow a diverted route via Boulevard des Moulins and Boulevard d’Italie.