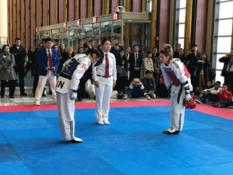 Jade Jones and Skylar Park bow to each other before their demonstration match in the Visitors Centre at the UN. ©DR

On 28 March 2017, the Permanent Mission of Monaco to the United Nations, in New York, celebrated the 4th International Day of Sport for Development and Peace, in collaboration with Peace and Sport. To mark the occasion, a number of Olympic tennis and taekwondo champions performed sports demonstrations at the Headquarters of the United Nations. They included double Olympic gold medallist (London 2012 and Rio 2016) and Vice World Champion, Jade Jones of Great Britain and Northern Ireland, Tahl Leibovitz, Paralympic table tennis champion, along with Maria Toorpakai, Pakistani squash champion in 2012 and Peace and Sport’s “Champion for Peace”, and World Taekwondo Junior Championships’ gold medallist Skylar Park from Canada. Children from New York clubs were invited to take part in several fun workshops. Monaco’s Permanent Mission organised a lunch reception attended by delegates from Slovenia, Canada, Tunisia, Morocco, the United States, Russia, China and France as well as representatives of the federations.

The event was an opportunity for the diplomatic community and UN staffers to learn more about the discipline and practice of sport, which has a positive impact on people from different cultures and backgrounds, whilst also underlining the importance of adapting practices for people living in developing countries or post-conflict societies.

The day ended with a photograph of all of the participants holding up the #WhiteCard#IDSDP2017.

At the Consulate General of Monaco in New York, Monaco’s Ambassador to the United States,       H.E. Mrs Maguy Maccario Doyle and the Consul General, Mr Gildo Pallanca Pastor, also marked the launch of this international day by holding a reception at the Consulate General. Guests included H.E. Mrs Isabelle Picco, Permanent Representative of the Principality of Monaco to the United Nations, Mr Joël Bouzou, President and Founder of Peace and Sport, along with a number of personalities including H.E. Mr Kairat Umarov, Permanent Representative of the Republic of Kazakhstan to the United Nations, and the heads of the International Fencing Federation (FIE), the International Table Tennis Federation (ITTF) and the World Taekwondo Federation (WTF).