Presentation of the Rolex Monte-Carlo Masters 2022 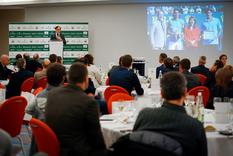 By way of introduction, Zeljko Franulovic noted that going ahead with the 2021 tournament had been a bet that had paid off. Despite the fact that it was played behind closed doors and the health measures that were brought in to protect the tournament’s players and staff (nearly 2,000 tests were carried out), the event was a genuine success, with a victory for Stefanos Tsitsipas and excellent performances from some of the younger players. The presentation was also an opportunity to announce the arrival of three new partners: Generali, Maserati and Replay, and to thank all of the partners who have remained loyal to the tournament in spite of the circumstances. Rolex has also renewed its partnership for the next 10 years, and BNP Paribas has committed to a further three years.

Mr Franulovic then paid tribute to the memory of Baroness Elizabeth-Ann de Massy, recalling that the 2021 Rolex Monte-Carlo Masters also featured an homage that H.S.H. Prince Albert II had wished to pay her. Accompanied by Ms Melanie-Antoinette de Massy, the club’s new President, Novak Djokovic and Rafael Nadal, the Sovereign Prince unveiled a plaque in memory of an outstanding president who will forever remain a legendary figure in Monegasque tennis. Since 9 June 2021, the club’s main thoroughfare, leading from Entrance 1 to the tennis courts, has borne the name Allée Baronne Elizabeth-Ann de Massy.

This year’s tournament will be launched by reigning champion Stefanos Tsitsipas at the draw which will be held on the terraces of the Thermes Marins de Monte-Carlo at 5 p.m. on Friday 8 April. It will be broadcast live on Monaco Info.

With regard to the players committed to appear, Mr Franulovic explained: “The definitive list will not be released until 14 March 2022, but we are confident that we will, as usual, be playing host to the world’s best players. Alongside world number one Novak Djokovic, we are expecting Rafael Nadal, who has won the tournament 11 times and was victorious at the 2022 Australian Open, Daniil Medvedev, winner of the US Open and a finalist in this year’s Australian Open, Alexander Zverev, Olympic champion and winner of the ATP Masters 2021, Stefanos Tsitsipas, the reigning champion, and other top ten players. We are also delightedto once again be welcoming the top French and Italian players.”

For the enjoyment of the general public, a mini tennis exhibition will be organised at the beginning of the 2022 tournament, on Saturday 9 April on Place du Casino. Two of the best players in the tournament will take part.

Join us from 9 to 17 April 2022 on the terraces of the Monte-Carlo Country Club to kick off this historic tournament, which is this year celebrating its 125th anniversary and which traditionally marks the start of the European clay tennis season.