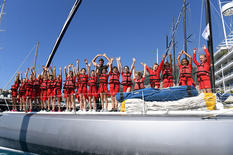 Pupils from Ecole des Révoires visited the Yacht Club de Monaco this morning for an up-close experience of the Monaco Globe Series and to meet Pierre Casiraghi and Boris Hermann, co-skippers of the Malizia, which is taking part in the race.

For the first time in its history, the Yacht Club de Monaco is organising an IMOCA championship race, renamed the “Globe Series”. This is an international level competition and a qualifier for the Vendée Globe.

Nine crews have entered the competition, which will take vessels along the west coast of Corsica and towards the Aeolian Islands (Stromboli), Palermo, the Balearic Islands and finally Monaco. The aim is to accumulate the highest number of points in order to qualify for the bigger ocean races.