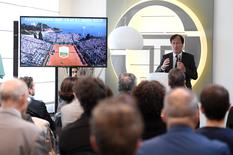 On Thursday 18 October 2018, Tournament Director Zeljko Franulovic was in Milan to give an overview of the next Rolex Monte-Carlo Masters, which will be held from 13 to 21 April 2019 on the legendary clay courts of the Monte-Carlo Country Club.

After thanking all of the tournament’s partners, including sporting goods manufacturer Sergio Tacchini which hosted the press conference at its premises, Zeljko Franulovic emphasised that “the 2018 Rolex Monte-Carlo Masters was a major success, with Rafael Nadal, the Spanish player who symbolises the tournament, securing his eleventh victory [...]. Attendance this year once again broke previous records, with the tournament drawing 136,671 spectators, 33% of whom were Italian. Tickets were sold out by the Tuesday.”

The Tournament Director also noted that the booking website for the 2019 event (www.rolexmontecarlomasters.mc) was already seeing a high level of activity, confirming the ongoing enthusiasm for the Rolex Monte-Carlo Masters.

The traditional charity exhibition match, dedicated this year to the Monaco Red Cross, will take place on Saturday 12 April on the Rainier III Court, attended by the tournament’s top players.